Gradienting or texturing is an important aspect of any build, regardless of what resource pack or mod you’re using. Yet it can also be rather difficult to get right, and extends far beyond a splattering approach to texture/detail a surface. Mere splattering can be viewed as a somewhat lazy way of adding detail, and rarely looks good. Because of this we bring you a comprehensive guide to gradienting your builds and provide you a better understanding of surface detailing to bring your builds to the next level.

What is a gradient?

A gradient is simply a transition from one value and/or colour to another. In Minecraft this means transitioning one block to another to create a gradient effect on a surface. You can contrast gradients to splattering; where one is a specific transition effect to texture your walls, and the other is a random placement of another block to create haphazard variation.

Gradients are used in almost all visual art forms to create interest and detail to otherwise bland surfaces. This of course also applies to mediums like Minecraft.

There are different ways of creating gradients, and some types are better suited for certain builds than others. With that in mind we’ll first have a look at the more typical ‘drip’ style that works for almost anything.

Below is a representation of gradients using warm-cool wool blocks. The left panel shows an exaggerated gradient ranging from warm to cool. Notice that the blocks range successively, and that red does not touch yellow, nor yellow blue. That transition is essentially what you want to capture when you do a gradient. If you have a light, medium, and dark block, you want to transition the light to the dark smoothly.

In the middle is that same gradient, but with added complexity to increase interest. The rule of transitioning the block successively is subverted at certain points, such as the orange touching the green on the right side of the central panel, or the blue touching the yellow on the top right. Skipping some steps in your block palette in particular sections can help create a stronger contrast, which in turn creates more visual interest than if you have an equally distributed gradient. Obviously keep this to a minimum, and only as an accent when needed, otherwise you start to ruin your underlying gradient structure that you’ve built up.

On the right you have a generic splattered surface, as an example of why randomly splattering a surface to create texture usually looks quite bad. It’s best to avoid this whenever you can, unless it’s something in your build that’s hidden/insignificant but you still wish to detail it (beneath bushes, or forest-grass blocks interspersed among regular grass blocks - blocks which contrast so little that gradienting them is a waste of time).

An error people often fall for is to incorrectly stagger the transition diagonally . While not really breaking the transition (a red block isn’t touching a yellow one), overdoing this will ruin your gradient and begin to look splattery. The left shows a gradient with none of these diagonal bits, but purely a smooth gradient. The middle shows the error we’re talking about, where it begins to splatter. The right shows a combination of both, where there are a few of these diagonal bits but they’re used to accent the greater surface, but in moderation. This can be something to keep in mind to add further complexity to your gradients and prevent having something that looks too artificial and bland.

Another good way of texturing your surfaces is to use a type of cluster gradient. Instead of dripping the gradient you instead cluster it into clumps. Below we use the more complex tips from previously and integrate it into this particular gradient. Instead of having the transitions vertically or horizontally, you have them toward the clusters, whilst also accounting for variations. Be careful to sufficiently vary these clusters in size, shape, and position so as not to have repeating patterns. Try to make the positions of the clusters as random and organic as you can. You generally want to avoid having rows or columns of these clusters.

Choosing the correct blocks for your gradients is vitally important in having a good final product. Generally you should choose blocks that are as close as possible in terms of value, colour, and general shape.

Using the previous gradient example, we can choose a palette that would suit a stone wall. Ranging the stone blocks from light to dark with as little contrast between each block as possible will allow us to create a seamless gradient.

Using the example of the wool surface, we can apply the palette to the respective colours.

An interesting piece of advice I’ve gathered over time is that being aware of the CTM (the textural variation of a single block) can influence how your gradient blends.

For example the ‘lime mortar masonry’ block has significant variation. This means that in some cases it’s going to mix better or worse with other blocks. In general I would avoid mixing too many other blocks in a gradient featuring this block. The above examples are probably as extreme as you should go with such a surface, since some of the blocks involved already have extensive CTM’s that do most of the work for you.

Squinting your eyes will help you notice changes in value a bit easier.

The same method can be applied to roofs using drip-style gradients, since most of the weathering will occur due to rain/wind etc. Think about where the weathering will be most visible, where the rain will collect on the roof and how the weathering might discolour the roof material. For thatch you have the possibility of using the moss blocks, which work well as an intermediate gradient between each of the standard thatch blocks, that being said you should think about where on your roof the moss will gather.

Roads work in much the same way. Depending on the soil, you may want to consider how the gradient (in this case the ruts/treading) appears. Using the standard plains biome grass, a road with darker tread lines in the middle tends to work better. However the inverse can also work well if your grass/biome is a bit lighter.

The previous principles apply here again. You want to gradient darker dirt blocks to lighter ones, then you vary it from there.

Something a bit more complex using two ruts (only the right side was properly completed here):

You can add another realistic dynamic to your gradients by darkening the immediate blocks below a window to simulate water dripping down open crevvasses in a wall. Here I’ve skipped some steps in the implied gradient to add more contrast to the drip stains.

Gradients are also great at helping define the form of your build. In the example of the cathedral below, the shape of the windows are better defined by gradienting a lighter edge around the edge of the arch. Without this it might be difficult to judge the nature of the window and the depth of the wall behind the outward columns. Not to mention it simply looks nicer and makes the wall more appealing to look at.

In regards to depth, gradients are quite vital. Below is a generic sandstone wall. Without any selective gradienting, it’s almost impossible to make out the crenellations on the first battlement. You’d also be forgiven for not realizing there were two levels at different depths rather than a straight vertical wall.

However if you use a selective drip gradient, you can carefully transition the wall in a way that brings out not only the crenellations, but the changes in depth of the two levels.

(It should be kept in mind that the previous ‘clustered’ gradient styles wouldn’t really work here, because the use of gradients to bring out the form only really works if you’re directly transitioning the wall from one value/hue to another).

Lastly, nature can also benefit from gradients. Below is an example of how you might approach integrating moss into a wall by transitioning darker elements into it.

Hopefully this guide was helpful in explaining some common techniques for implementing gradients into your builds!

No items found.
Other Guides: 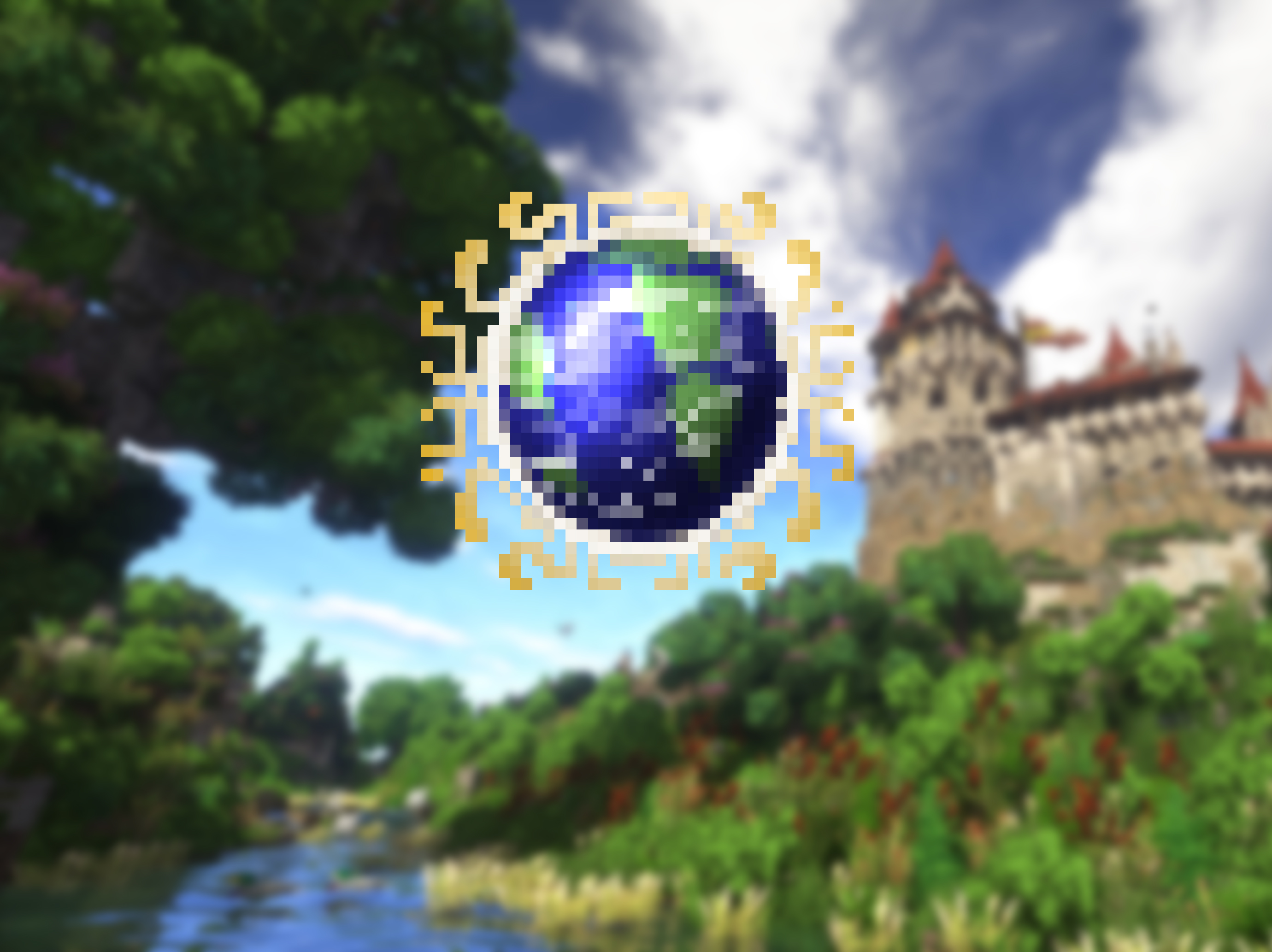 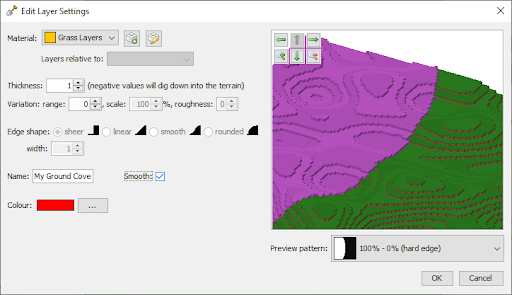 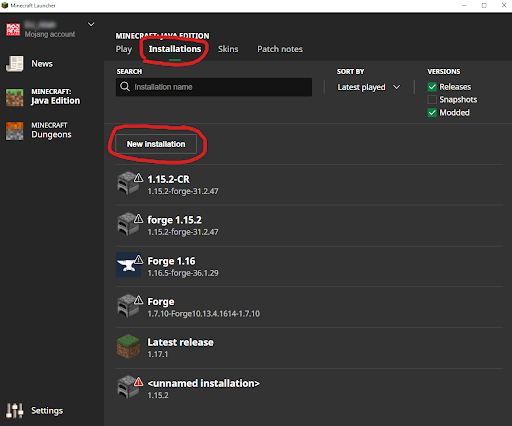 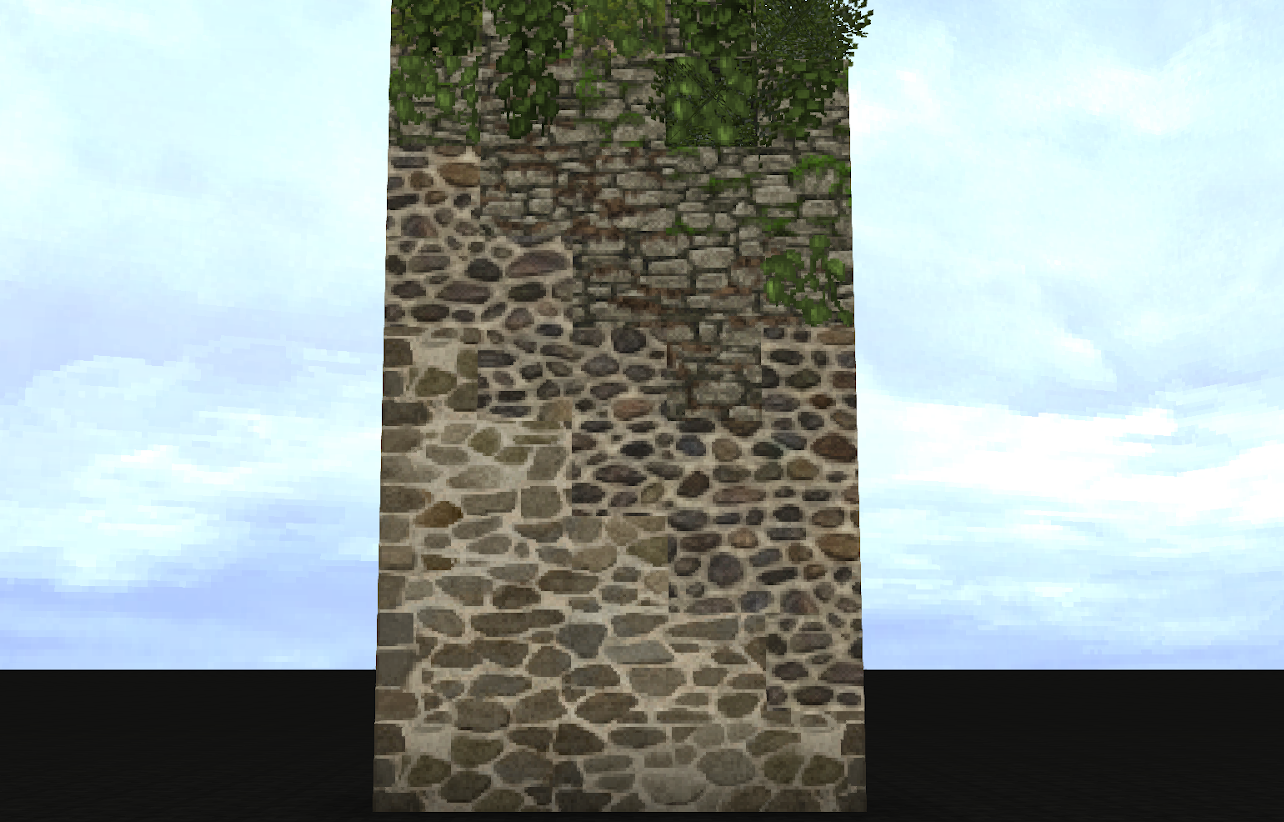